The Art of Ayris Hatton

I have been distraught by the amount of trash on our roads.  Litter seems to be increasing daily.  I finally called my Congressman, Jared Huffman and he eventually referred me to a local ‘group’ of three other women called Marin Clean Highways.  Among other things, they are working to enforce an ordinance to tarp trucks so debris doesn’t fly off.  I am working on litter prevention through the schools by making posters with kids.  The children have been so creative and so I share a sample below. College of Marin has kindly agreed to print 20 posters and then we will post them is public places throughout the county.  Our small group has joined with a larger organization, Marin Litter Coalition, made up of several local and state environmental organizations.  County officials and workers are part of this group because they have been working to meet standards set by the Clean Water Act which requires no debris in storm drains.

So my frustrations and one small step led me join many others who have similar concerns.  We want to honor this generous planet and keep it clean. 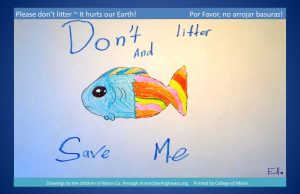